From 2007, the Rhino Stampede was replaced with the 4×4 Chimp Challenge. The event was previously sponsored and organised by City Tyres Uganda and the Rhino Fund of Uganda with technical support from OnCourse.

About the Rhino Fund

The Rhino Fund of Uganda has been working towards re-introducing Rhinos into Uganda. These animals had been wiped out by war and harsh economic conditions, which in turn, led to poachers hunting them down and selling their horns. On 20th July, 2005, after three years of preparations, fund raising, training and construction, the first rhinos arrived at Ziwa Rhino Sanctuary. 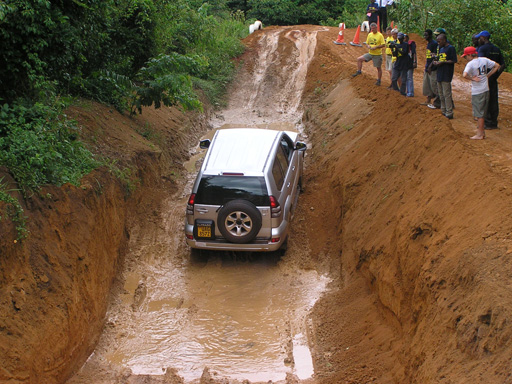 The day was a huge success with great off-roading events and some fantastic prizes from the sponsors.  Challenges included Divorce Derby, Balance Beam, Off-road Skills Trail, Mud Run, Wheel Change Competition and Pull The Mini Out Of The Water! The sum of 4,612,000 Ushs (2,306 US$) was raised to go towards the construction of the Rhino Sanctuary at Ziwa Ranch, Nakasongola.  Raffle Prizes Included:

The day was a huge success with great off-roading events and some fantastic prizes from the sponsors. Challenges included the Divorce Derby, Balance Beam, Off-Road Skills Trail, Wheel Change Competition, “Drag the Tyre through the Mud’ and the Relay Race! The sum of 3,000,000 was raised to go towards the final construction of the Rhino Sanctuary at Ziwa Ranch, Nakasongola. Raffle Prizes Included:

This year we had 11 teams pitting their wits against one another to take home the event trophy, a huge soapstone rhino courtesy of Banana Boat. The events consisted of a skills trial though some serious wet and muddy terrain, a divorce derby which thankfully did not live up to it’s name though close at times, the balance beam, relay race and spare wheel changing.

Individual event prizes were given with points from each event adding up to give an overall winner.

Finally a word of thanks to our sponsors. This year saw City Tyres taking over as the main sponsor of the event and their generous offer meant that there were absolutely no overheads and all money raised went to the Sanctuary. They also gave out some great prizes as did Nalubale Rafting, Adrift, Banana Boat, MTN, Golden Lilly, Cineplex, City Oil, Savers Supermarket, Le Chateau, Nawab, Alleygators.

Thanks to all above for their generosity. Not forgetting Shares Uganda for their generous donation of 2 million. The sum of 5,200,000 was raised to go towards the final construction of the Rhino Sanctuary at Ziwa Ranch, Nakasongola.

Thanks also to the marvelous job done by the volunteer marshals – you know who you are.

Our latest news and articles are now posted on Mick’s blog.

Where to find us